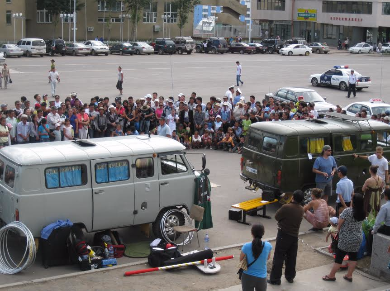 The first expedition of Mission Manduhai to Mongolia took place from August 9-August 28, and was led by Chimgee Haltarhuu. It was a great success! Here is some statistical information on the tour:

•16 people on the tour
•15 days on the tour, covering 2,700km
•Approximately 80 hours of travel time (not including air travel)
•12 performances in 7 provinces for thousands of people
•1300 leaflets were handed out to audience members

The first show was performed in a nursing home in a village northeast of Ulaanbaatar for 150 senior citizens. The rest of the shows were in villages in northern Mongolia. In many cases the performances were outside to attract and involve larger audiences. At first the audience seemed a little unsure of what to expect when Chimgee and Saruul (our representative from the National Center Against Violence) introduced the show and talked about the “For Safe Future” campaign. Then they really cheered and laughed obviously enjoying the performance. Following the show, leaflets were handed out giving information about domestic violence: what are the laws, what constitutes violence, what to do if you are being abused (including how to contact NCAV), and what you can do as a community to change the culture of violence in Mongolia. After information was passed out, many men and women wished to discuss the problem of domestic violence and expressed their gratitude to Chimgee and Saruul.

In Chimgee’s hometown of Darkhan, the troupe visited a circus studio made up of orphans and homeless children, some of them even were living in the sewers. The founder of this group, “Shonhoodi Circus”, is a former Mongolian State Circus Performer.  For our show in Darkhan we included these children on our performance, and they were very thrilled and excited to be performing with an American circus. Chimgee is now a strong supporter and donor of Shonhoodoi Circus.

Mission Manduhai was unable to visit a shelter in Ulaanbaatar because one shelter was attacked by an angry abuser and they were scrambling to find a new hidden place for their safety. 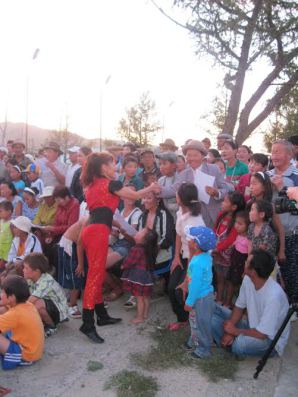 Upon returning to Ulaanbaatar, Mission Manduhai rehearsed for two days in the Mongolian State Circus building along with performers from the Mongolian State Circus. On August 27, there was a performance celebrating the Radnaabazar Circus School’s 70th birthday, with the proceeds from ticket sales ($3,500) donated from Mission Manduhai directly to the Radnaabazar Circus School (the school that Chimgee graduated from).  After the performance, Chimgee was surprised with a government award “Foremost Cultural Worker” from the Ministry of Culture of Mongolia.

Mission Manduhai wants to give much thanks to all of its supporters, and especially to the performers who were amazing and great at dealing with the adversity of Mongolian life. Chimgee intends to travel back to Mongolia with Mission Manduhai 2011, with a small group of health professionals to again raise awareness of domestic abuse. 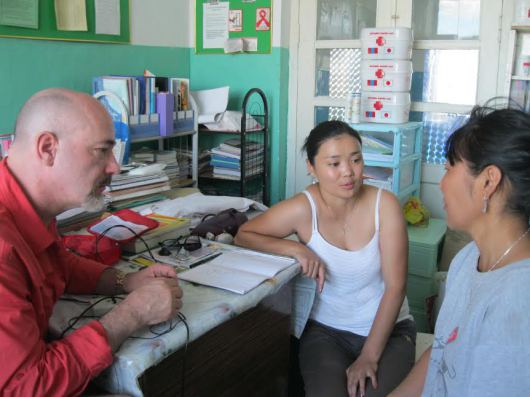 From August 16-Sept. 2 Mission Manduhai made its second expedition to Mongolia to raise awareness of domestic abuse.  In this second year of the mission, a group of seven Americans and Mongolians, led by Chimgee Haltarhuu traveled over 1,500km from Ulaanbaatar and visited 8 villages in 2 different provinces, in the southern part of Mongolia (the Gobi Desert).  People on this trip were:

The chance for free medical treatment and free entertainment were a great draw to the villages and brought many people.  There was the opportunity to discuss the social problems contributing to the problem of abuse, and in many case a great dialogue was opened up.

Mission Manduhai had 1,000 buttons manufactured in Minnesota and these were given out.  The two types of buttons said, “Men can stop the violence” and “The Love Never Ends,” written in Mongolian.

The handing out of over 2,000 flyers outlining the recent changes in domestic abuse laws and instructing ways to prevent abuse, including a hotline number to the National Center Against Violence (NCAV) was a tremendous success.  It will help spread the word to these extremely remote places.  In a more direct way, the medical treatment was able to identify an incident of spousal abuse and an incident of rape.  Both of the victims were transferred to a shelter and there are court cases pending in UB. 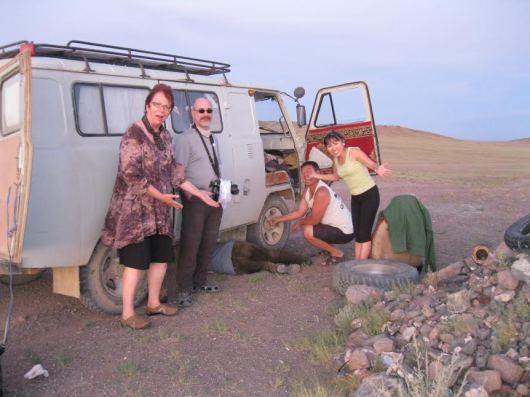 In Dund-Gobi, and upon returning to UB, the American psychologist gave training to 28 NCAV members, psychologists and emergency workers in a new treatment called EMDR.  This treatment proved to be very effective to help women in the Gobi villages.

One negative from the expedition was the problem of transportation through the Gobi.  The original auto was not fit to travel; a second vehicle was found in the Gobi, but the driver deserted the expedition with the day’s pay and a tank of gas.  Finally, a third vehicle was found.  This was a very old Russian van, but the driver was very experienced at fixing any problems quickly and he proved to be a good driver.

A positive outcome of this mission, we were able to help a girl who was being sexually abused by her step-father and uncle after she was treated by our gynecologist. We were also able to help a woman who had just been beaten by her husband when she was treated by our psychologist. Both of these women were taken with us for protection and sent to a safe house in Ulaanbaatar. The step-father and uncle were prosecuted and convicted.