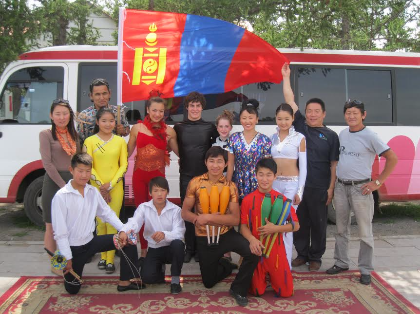 The third expedition of Mission Manuhai took place from August 19-September 7, and was led by Chimgee Haltarhuu. Three students from Circus Juventas traveled to Mongolia with Chimgee and performed.  Chimgee also hired performers from Shonkhoodoi Circus in Mongolia to fill out the show. The free performance was a way to attract crowds of nomadic herders who never are able to see live entertainment, enabling many flyers against domestic violence to be handed out. This year, four different flyers were used; one for children, one for teenagers, one for young adults and one for older adults.  The tour was a great success.

Naranjargal Urgahnar, a representative with the National Center Against Violence traveled with Chimgee’s group. Before every performance, Chimgee and Naranjargal spoke about Mission Manduhai and about the goal to spread the word, especially to young people, that domestic violence is not right.

Here is some statistical information on the expedition: 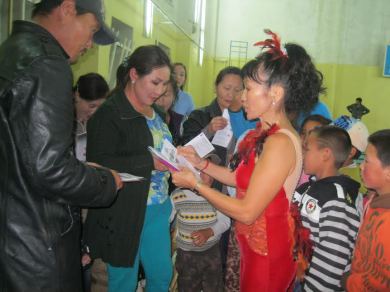 During the early part of the tour, two human rights advocates joined the group: Australian attorney Amy Rogers of the National Human Rights Commission of Mongolia, and photographer Mareike Gunsche. They wanted to interview and photograph Chimgee for a book project and future exhibition.

One photo taken and submitted to Reuters by Mareike Gunsche was chosen by Yahoo News to be one of the photos of the day on August 27, 2013 (there were 19 photos shown worldwide, but Mission Manduhai was the first photo!).

The young performers of the Shonkhodoi Circus were also able to hear the words against domestic violence, and were happy to be traveling and performing for the first time in the Mongolian countryside. 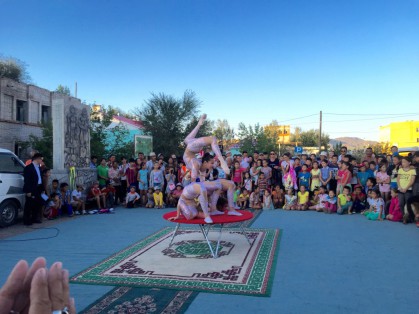 In August of 2014, Chimgee Haltarhuu of Mission Manduhai traveled to Mongolia. A meeting with the National Center Against Violence in Ulaanbaatar ended with a five-year agreement to set up a hotline for abused women. Also discussed was the tour route for the 2015 Mission Manduhai trip, which will be in Eastern Mongolia. A two-day trip to this region helped to get a feel for possible transportation difficulties, and the best route is being planned to reach the largest amount of people.

A meeting was held with Purevbadam Khad, the owner of the Mongolian State Circus, to discuss the use of acts from her circus and to rent a vehicle for next year’s tour.

Another meeting was held with Yanjenbeleg Batmunkh, who directs a circus group in UB, to discuss using some of her acts. Chimgee will combine these acts with her American Circus Juventas students to make next year’s international program.

Chimgee Haltarhuu was interviewed by Mongol TV HD about her work in the United States and her Mission Manduhai work in Mongolia. This is one of Mongolia’s top watched channels, so the interview was seen by many Mongolians for sure.